The Structure that Anchors Chicago 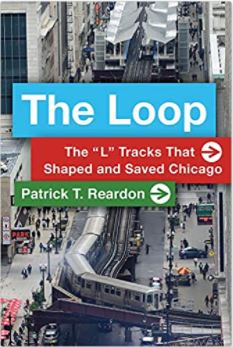 The Structure that Anchors Chicago - Signed by the author, Patrick T. Reardon

Every day Chicagoans rely on the loop of elevated train tracks to get to their jobs, classrooms, or homes in the city’s downtown. But how much do they know about the single most important structure in the history of the Windy City? In engagingly brisk prose, Patrick T. Reardon unfolds the fascinating story about how Chicago’s elevated Loop was built, gave its name to the downtown, helped unify the city, saved the city’s economy, and was itself saved from destruction in the 1970s.

This unique volume combines urban history, biography, engineering, architecture, transportation, culture, and politics to explore the elevated Loop’s impact on the city’s development and economy and on the way Chicagoans see themselves. The Loop rooted Chicago’s downtown in a way unknown in other cities, and it protected that area—and the city itself—from the full effects of suburbanization during the second half of the twentieth century. Masses of data underlie new insights into what has made Chicago’s downtown, and the city as a whole, tick.

The Loop features a cast of colorful Chicagoans, such as legendary lawyer Clarence Darrow, poet Edgar Lee Masters, Mayor Richard J. Daley, and the notorious Gray Wolves of the Chicago City Council. Charles T. Yerkes, an often-demonized figure, is shown as a visionary urban planner, and engineer John Alexander Low Waddell, a world-renowned bridge creator, is introduced to Chicagoans as the designer of their urban railway.

This fascinating exploration of how one human-built structure reshaped the social and economic landscape of Chicago is the definitive book on Chicago’s elevated Loop.

The SEAOI Financial Resources Committee is investigating non-dues revenue streams and is interested in exploring the feasibility of offering various items to our members in an auction format. All proceeds will be used by SEAOI for operational expenses.

If you have any questions or feedback about this auction, or if your firm would like to donate an item to our auctions, please contact Stephanie Crain.